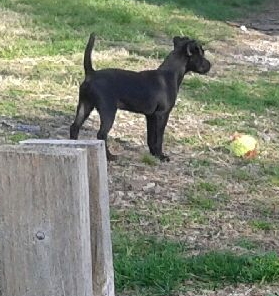 This is Paul our new Patterdale Terrier pup. I'm look for a good name for him. This is not a contest. But I want something good for his pedigree name. His call name is Paul and will be used in his name if we can come up with something good other than Paul. I want something creative that expresses his character, looks, etc.

Patterdales are working terriers. They were bred to hunt small game like foxes, rabbits, rats, raccoons, badger, etc. They will go into the ground and work relentlessly to get its prey. They can go into the ground and bring back the prey. Often the hunter will bring a shovel with hem. This is because it is also common that once they trap the prey and go into the ground to capture it they will still in the ground. If the hunter does not dig it out they will lose their dogs. They are known to be fearless dogs. People often call them big dogs in little dogs bodies.

They are calm companion indoors. They need plenty of exercise and room to run outdoors. They have been known to easily clear a four foot fence. They are very smart dogs that compete in weight pulling, agility, obedience, rally obedience, schutzhund, dock diving, terrier races, steeple races, etc. Some have pulled in excess of 1000lbs.