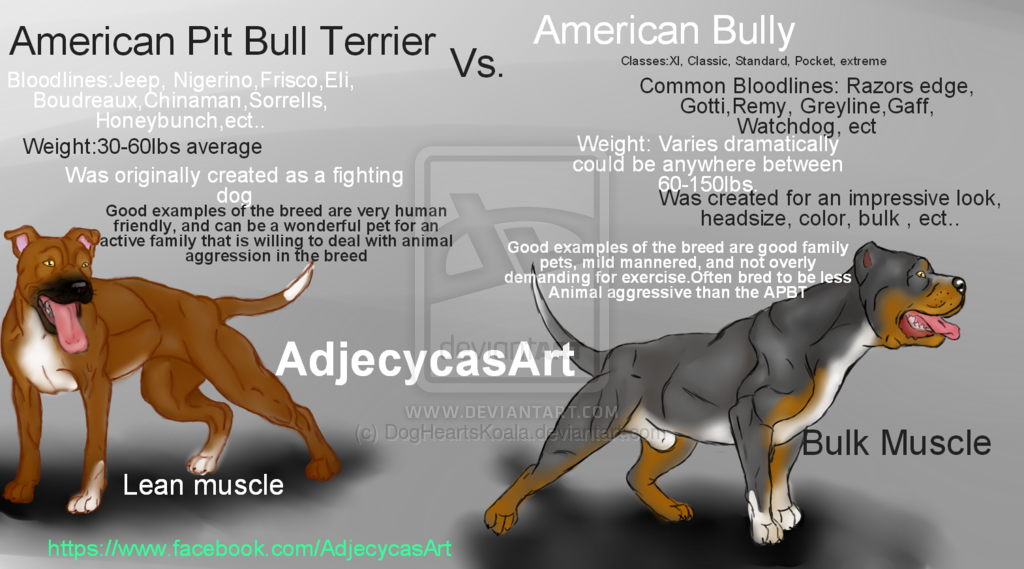 The American Bully is a Spin-off the American Pit Bull Terrier, just like the American Staffordshire terrier (Am-Staff). The same linage and blood, but for generations bred in a different direction, for different purposes and looks.

The “Pit Bull” was a dog that came to form in the late 1800’s. The purpose of this breed was to be the ultimate competitor. The breed was created for the sport of dog fighting, which for hundreds of years was a legal sport, celebrated by even the Elite in society. These dogs were bred to never waver in the heat of battle, hence the term “GAMENESS”. This term means to have the will to go on, no matter the obstacles or challenges to overcome, even fatigue and to never mentally quit or give up.

The first APBT’s was introduced for breed registration and acknowledgement to the only registry at the time, the “American Kennel Club” or the “AKC”. The AKC denied the breeds acceptance into the registry because there was no written standard for the breed; – physical criteria that a breed should posses, written standards and descriptions of such. At this time the only trait heavily desired was “GAMENESS”. Since the AKC denied the breed into its registry, a new registry was formed, the “United Kennel Club” or “UKC”. The UKC was created solely for this breed, and as years went on, a standard was written and adopted by the UKC.

There were still breeders who wanted the breed to be recognized by the “AKC”. So they decide to take the lines from the breed and bred them in their own direction. They bred them for companionship and the sport of conformation competition. Conformation Competition is a show where the dogs are judged on their physical traits, movement, and handling according to the written breed standards. These breeders wrote a new standard based on the “UKC”, and they continued to breed these dogs for 70 more years.

Because of this, the breed had changed in appearance and temperament. This spin off the APBT was no longer used for competition fighting, so their personalities, temperaments and builds changed. This new breed was given the name “The American Staffordshire Terrier” or “Am-Staff”. The “AKC” accepted the breed and now considers this a breed of its own and separate from the APBT. The “UKC”, however accepts these Am-Staffs as APBTs and will allow them to be single UKC registered as APBTs.

Dog fighting became outlawed in the 19th century in the US, and the UKC changed its purpose and standard for the breed. A group of the breeders of the GAME lines left this registry and created another registry called “The American Dog Breeders Association” (ADBA). For generations the three registries, UKC, AKC, and ADBA recognized the breed for different purposes and different standards, so the breed changed and spawned into different directions.

Nowadays the breed has been used for different types for conformation shows, weight pulling, companionship, and some still breeding the original game dogs. Due to these many directions, the breed has changed and spawned into different forms and personalities which brings us to where we began “Pit vs. Bully”…

About 17 years ago, Dave Wilson started breeding to create the Razor’s Edge Line. He started with a foundation AKC registered Am-Staff, they carried the heavier builds, larger heads and more mellow demeanors. He crossed in lines from UKC registered Pits, to add more muscularity, more drive and a harder look. After 7 years of blending and selective breeding he came out with a look and personality he was striving for. These dogs carried blocky heads, short and square muzzles, full body muscularity, heavier bone structure and just all round physically powerful builds. The personality was still to be stable and docile towards humans, and allot of the aggression washed out. The ultimate companion dog was created.

These dogs had to be registered with the UKC, because it was the only registry that acknowledged all the spawns as the same breed. So the dogs began competing in UKC conformation shows. The dogs did very well and in time they were given a slang name “BULLIES”. This name was given to basically describe their build and the thicker look of the style. In time “BULLY” bloodlines spawned all over the US.

Razors Edge was just one of many of the “Bully” lines. Other  popular “Bully” lines are: Greyline, Gottiline, Gaff, Watchdog, Camelot, DeLaCruz, Butthead, Royal, Kaos, Gangus Kahn and many more. Even the Razors Edge bloodline spawned into other lines like Remyline and Shortyline. A new look and style had formed, and its popularity spread worldwide, the Bullies had begun to make their own name and place within the breed. In the UKC conformation shows, the love for the Bullies had spread way beyond. And in time the show would push for a direction that did not favor the Bully style. This left a large group of extremely diverse people, who were left nowhere to compete and show off their dogs.

In 2003, a concept for a new registry was created for the purpose of promotion, registration and competition of this style of breed, the “Bullies”. Fanciers of the “Bullies” were already gathering in large numbers at BBQ style events. People from all over and of all races would get together and host BBQ style events for the “Bullies”. This provided a more relaxed atmosphere, usually with DJs playing music, vendors selling Bully merchandise and paraphernalia, with Bully breeders, Bully owners, and Bully enthusiasts flocking in the hundreds.

A new registry was formed to accommodate these people and their Bullies, so they had  a way to compete with their style of dog. The registry decided to ad “American” to their slang name “Bully” this was to represent the nation of the breed origin. The kennel club registry became “American Bully Kennel Club” or “ABKC”. Now the breed had a name, a registry, and a way to compete! The biggest part of the “American Bully” goes beyond the dogs, and is the lifestyle surrounding the breed and events. The “American Bully” now has a following worldwide and Expo style events for these dogs bring in spectators by the thousands. The “Pit Bull” has been a-part of the urban world for decades now, but he “American Bully” is making its name as new face in this world.

The main differences between the Pit Bull and the American Bully are hard to state as facts, because there are many different styles to the Pit Bull. So we will use a general comparison using the genetic form of the everyday backyard Pit Bull;