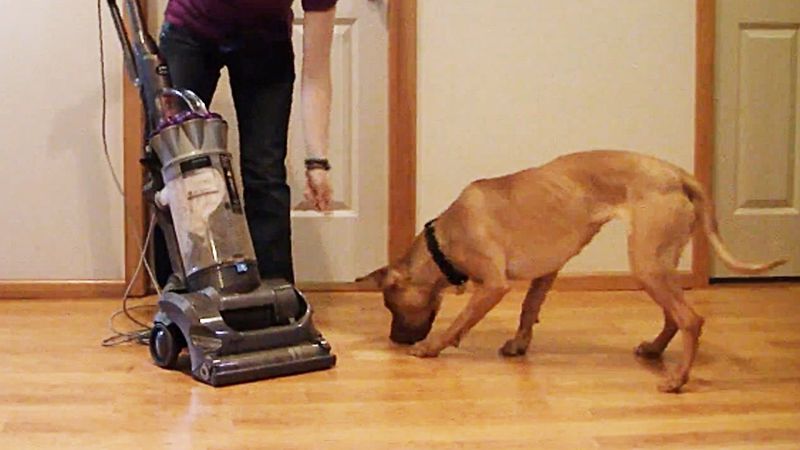 How many times have you attempted to turn on the vacuum, only to have your dog growl, snarl or even scamper away from the machine? If this happens to you, don’t worry, it’s actually an incredibly common behavior for dogs. Most dogs despise vacuum cleaners, and for a few specific reasons.

They hate the noise

Has your dog been exposed to a vacuum sound besides when you’re actually vacuuming? Probably not. PetMD states that dogs will feel sound phobia when they are exposed to noises they aren’t familiar with. It’s probably the reason your dogs like to run and bark at passing cars, or other unfamiliar noises.

“Large ‘critters’ that make very loud noises are threatening to the dog—even if it does not breathe,” said Dr. Diane Levitan, veterinarian and Wag! Advisory Board Member. “The sudden onset of a loud noise and strong vibration will startle most dogs and scare them. Their instinct is to get away from it before it eats them!  It also moves around in a ‘threatening way’ and is often ear their beloved pet owner, whom they want to protect.  They are smart to be afraid!  Thankfully they don’t need to be.”

If noise is the issue, the best thing to do is keep exposing them to the noise. After a time, they will start to associate the noise with something that isn’t threatening, so they won’t feel the need to raise their guard up against it.

It messes with their smell

While the vacuum runs back and forth on your carpet and floors, certain types of scents could be kicked up into the air that the dog may not be particularly used to. The vacuum can easily lift debris and dust that can cause an unpleasant sensation for the dog, causing them to get defensive around the vacuum

They hate the suction

While the root of this behavior is still under speculation, some experts believe that the suction of the vacuum is similar to a dog’s behavior towards the scent. Typically, a dog will use its nose to learn about a new territory or another animal. Since the vacuum is also “sniffing” like a dog, it’s an action that the dog would recognize. However, the suction is so violent compared to a simple dog sniff, that the dog may find this to be intimidating. This isn't even the weirdest thing your dog probably does—here are some of the reasons behind more strange puppy behaviors, like "running" in their sleep or barking at the window.